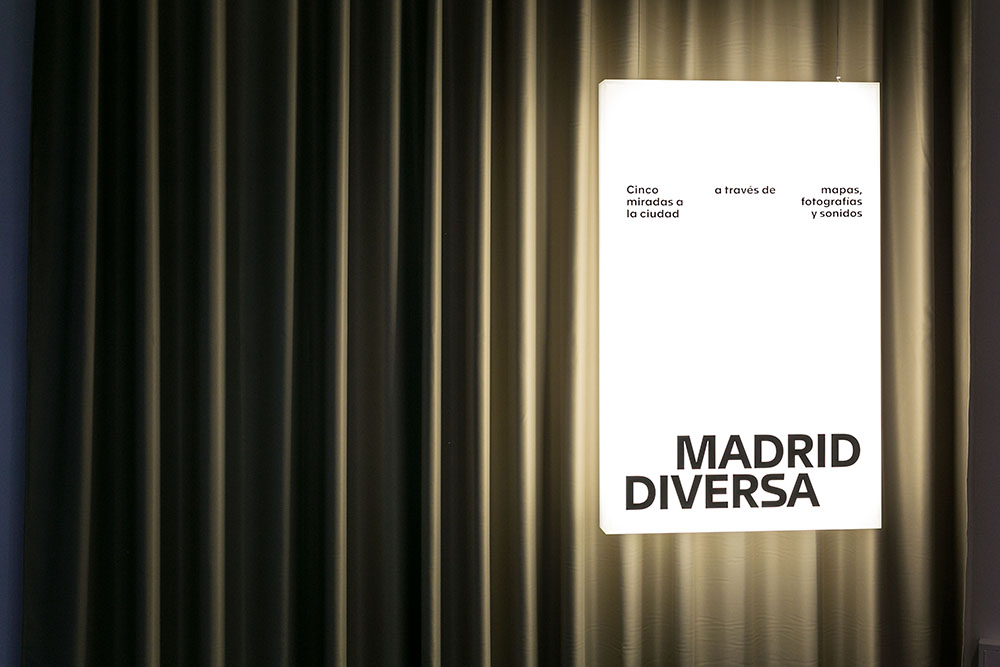 Maps by 300.000 km/s are part of the Madrid Diversa exhibition held at CentroCentro in Madrid, and curated by Ariadna Cantis and Javier Peña. This project is exhibited from the 29th of September 2022 to the 29th of January 2023. The exhibition analyses diversity as a distinctive feature of the city of Madrid in the contemporary context. In the current situation, in which cities tend to become standardised, to replicate commercial models and cultural structures, complexity transcends as a value in itself, as an identifying trait of urban life. Madrid Diversa explores this quality using three tools to describe the city: an atlas of large-scale maps created by 300.000 km/s, a photographic journey by five artists, and a soundscape by Lucas Bolaño, that overlap one another as fragments of the same reality. The exhibition invites us to immerse ourselves in the Madrid of today, organised into five areas: The Inhabited City, The Built City, The Shared City, The City of Uses and The City in Transformation. The maps construct an algorithmic storytelling based on massive data with a common thread of the city as a diverse environment. Metrics that do not focus on what the city contains, but rather on how diverse everything we find in it actually is. A city seen through data tends to focus on averages, the frequent and the similar. The perspective taken here aims to look at the strange, the improbable, the casual and the different. Two of the areas analyse the physical and inhabited environment while the other three propose an approach to urban behaviour through uses, public space and the transformation of the city itself. The maps are drawn from publicly available data from different sources: The National Institute of Statistics, the Land Registry, Madrid City Council, topographic base, satellite images and others.